Pepper farmers urged to keep calm and carry on

Industry leaders have called on distraught and anxious pepper farmers to remain calm and refrain from selling their produce at low prices, saying the current price plunge is most likely a fleeting phenomenon. 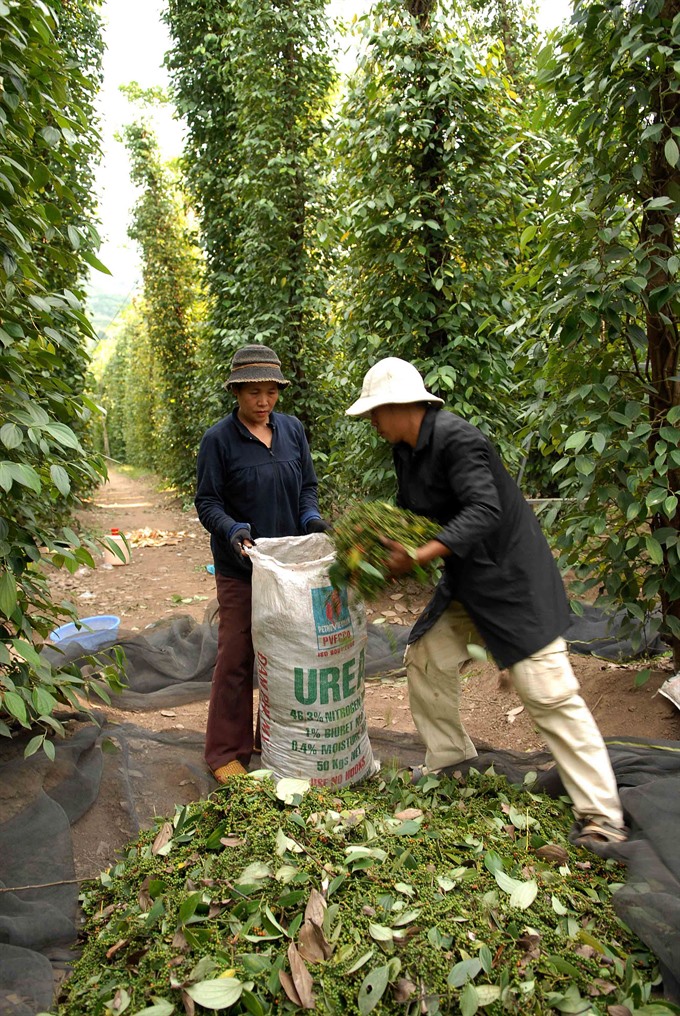 “Vietnamese pepper exports now account for nearly 50 per cent of global output, so we are actually in a position to control the market. Farmers should be calm and not sell at lower price, and the market will revert to its equilibrium,” Nam said.

In the Tây Nguyên (Central Highlands), the price for whole peppercorns on the domestic market has dropped from VNĐ180,000 (US$8.04) since last August to around VNĐ80,000 ($3.57) per kilogramme as of May 28 to reach the lowest point in seven years, and many pepper farmers are in dire straits, with some pushed to the point of having to sell their land to settle debts.

Authorities, meanwhile, are struggling to manage what they say is the consequence of unplanned farming and poor quality crops, which is dragging the whole industry down.

According to the Standing Committee of the Tây Nguyên Steering Board, farmers were “misled” by pepper price surges in recent years to plant the crop on a large scale, ignoring warnings from local authorities. Subsequently, gluts have led to the sharp decline in prices, the committee has said.

Nguyễn Thị Đô, a pepper farmer in Đắk Nông Province, said her family had taken a bank loan of VNĐ4 billion ($178,770) to plant pepper on a 10ha plot. At her initial calculation of VNĐ200,000 ($8.93) per kilogramme of whole pepper, profits were certain, but the drastic drop in prices could force her to sell her land to repay the bank.

Originally, Central Highlands provinces like Đắk Lắk, Đắk Nông and Gia Lai had planned to expand the farming area for pepper to a maximum of 6,000ha by 2020. But all these provinces have surpassed this limit by far. Đắk Lắk has nearly 28,000ha of pepper farms, Đắk Nông, 25,000ha, and Gia Lai, over 15,000ha.

The national total is about 150,000ha, set to produce about 300,000 tonnes of pepper in the next two to three years, so, going by supply and demand function alone, prices could drop as long as supply exceeds demand, said Hoàng Phước Bính, Deputy Chairman of the Chư Sê District Pepper Growers’ Association in Gia Lai Province.

To compound matters, even with farming on such a large scale, many farmers have experienced crop failures due to poor preparation and misuse of chemical inputs.

Huỳnh Văn Lan of Gia Lai Province, along with his peers, is increasingly worried about drops in both production and prices as his crop nears harvesting. Of more than 2,000 vines on his farm, 250 have died while the rest are producing just half their normal yield.

Tây Nguyên authorities have recorded a common practice among local pepper farmers of planting a new crop directly on malnourished, acidic and depressed soil without taking any step to replenish the soil with nutrients. This is causing slow growth and increased vulnerability to diseases.

To make matters worse, a number of farmers have been using seeds of dubious quality, affecting the rest of the harvest. The use of toxic pesticides and growth accelerators has further exacerbated the situation.

As if all this weren’t enough, the irregular drizzling since February 2017 has continued to dampen the pepper vines’ roots, exposing them to pests and affecting production.

Experts say that the combination of market glut and poor quality crop threatens sustainable development of the domestic pepper industry, most particularly its export potential. High non tariff barriers are another challenge for Vietnamese pepper, which has to contend with markets already familiar with exports from Indonesia, Malaysia and India, they say.

To prevent “spontaneous” and inefficient farming, the Tây Nguyên Steering Board has asked provincial authorities to adjust and firmly implement their provincial pepper cultivation plans. They should also organise comprehensive training programmes for local farmers in order to synchronise production in the region, the board has said.

It has noted that the need for sustainability stretches across all crops and agricultural products, requiring farmers to work closely with other stakeholders in the supply chain to obtain technical support and suitable farming inputs.

The Steering Board also advised local governments to focus on brand building and vertical integration to promote exports.  Clean, ecologically sound cropping is the ideal long term solution to the problems faced by the domestic pepper industry, experts agree.

Đỗ Hướng Dương, vice chairman of the Phú Nhuận Service Joint Stock, notes that despite the ongoing problems in quality, output and prices, export turnover has continued to rise.

According to the Ministry of Agricultural and Rural Development, Việt Nam exported about 75,000 tonnes of pepper worth $456 million in the first four months of 2017.

Vietnamese pepper has been a stable import in the US, United Arab Emirates, Pakistan, Indian and German markets in the first three months. There are signs of improvement in other markets like Thailand, where import of Vietnamese pepper has registered a year-on-year increase of 49.6 per cent.

These numbers prove that Vietnamese pepper is able to meet quality criteria in the strictest markets in the world, Nam said. Farmers have to be encouraged and helped to focus on improving their produce while the Government keeps an eye on mass production and quality control, he said, adding that that this would ensure market stability as well as sustained profits from this key crop.