Prime Minister Nguyễn Xuân Phúc has signed a resolution providing a credit package worth VNĐ100 trillion (US$4.4 billion) to invest in the development of high-tech agriculture at lower than market rates. 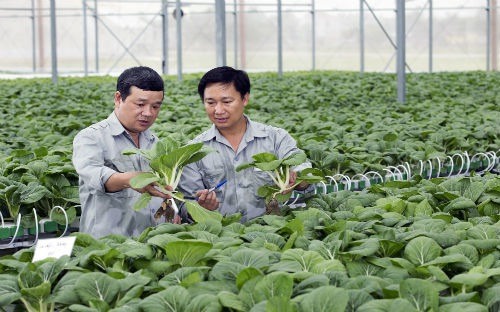 The resolution stipulates that commercial banks must cut operation costs so they can set interest rates for enterprises or individuals engaged in high-tech agriculture production at 0.5-1.5 per cent lower than the current commercial interest rates.

He also pointed out the need to define “short term, mid term and long term credit packages” to be applied in this programme. “Should we use the short saving term for the mid- or long-term loan or not?” Huệ asked.

“What’s more important is that we only lend the money to the right people/households,” Huệ emphasised. He added that over the past few years, only roughly 20 enterprises involved in high-tech agriculture accessed creditat low interest rates.

In his conclusion, Deputy Prime Minister Vương Đinh Huệ emphasised the importance of credit packages for high-tech agriculture in the context of the slow growth of the country’s primary industry.

He said the Government had already worked out a legal corridor to implement the strategy on high-tech agricultural development.

He assigned the State Bank of Viêt Nam (SBV) to instruct all commercial banks to implement the credit package in accordance to the Government’s instructions. Huệ also asked the SBV to work closely with the MARD to periodically monitor the credit programme implementation.

To support banks involved in the program, Huệ ordered the Ministry of Finance to complete as soon as possible a Government decree on agriculture insurance